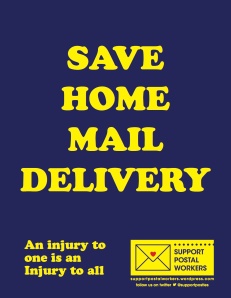 The following myth/fact sheet is available, along with other campaign materials, in a useful pamphlet form on our materials page.

Fact: On December 11, 2013 Canada Post’s management announced, without warning to either the public or the Canadian Union of Postal Workers, that home delivery for five million Canadians would be cut, at least 8,000 layoffs, and letter costs increased from 63 cents to a dollar.

As many have pointed out, Canada Post’s reasons for worse service at a higher cost are bogus, based around half-truths and flat out fabrications.

Myth: Canada Post says it is no longer profitable.

Fact: Since the mid-1990s Canada Post has been profitable every single year – except in 2011 when the company locked out the 50000 of its workers in an effort to weaken the union and its contract. In that time, Canada Post has fed over a billion dollars into the public purse.

Myth: Letter traffic is decreasing so much that a profitability crisis is inevitable, according to Canada Post the internet is to blame.

Fact: Since 1989 – before the advent of the internet – the volume of mail has actually increased. Parcel delivery has increased as letter volume has decreased. Private for-profit couriers make money delivering parcels, not letters.

Myth: The $6.5 billion shortfall in the Canada Post pension plan is a time bomb that can destroy the company.

Under Harper, the Canadian government gave Canada Post a four-year reprieve from paying into the pension plan. With the money they saved, they invested $2 billion into new letter-sorting machines, even though letter volume is declining – and is now being cited as a reason to cut Canada Post services! If money has been wasted, it was management’s fault. There is no pension crisis.

Myth: Canada Post has to end home delivery, there are no other options

Fact: If Canada Post introduced postal banking it could become even more financially sound and offer even better services to the public, especially in rural areas where home delivery often doesn’t exist. Many national postal services around the world offer postal banking which helps them stay afloat, even profitable. In fact, postal banking is exactly what the Canadian Union of Postal Workers is proposing for Canada Post.

Canada Post is being prepared for privatization precisely because it is highly profitable.

Myth: Community superboxes, which are to replace door-to-door delivery in urban areas, are safe and accessible.

Fact: Community superboxes are not safe and accessible. A CBC report has revealed that there were 4,880 incidents of vandalism, arson and theft from these superboxes between 2008 and 2013. There is also no guarantee that these superboxes will be accessible for thousands who have mobility issues, seniors or the disabled. And Canada Post has no plans to consult us on where community boxes are located.

Myth: Canada Post must have done consultations before deciding to cut services and raise postage rates.

Fact: Canada Post management kept both its workers and the public in the dark. They announced the cuts and service cost increases the day after Parliament retired for the holidays. They have provided no evidence that any real consultations with Canadians was ever attempted.

Myth: Seniors are telling Deepak Chopra that they want more exercise and being forced to pick up mail at community superboxes in all seasons is good for their health.

Fact: Seniors have not expressed that they think being forced to walk to community mailboxes will be good for their health. This is an outrageous lie that Deepak Chopra told to Members of Parliament when he was being questioned about the proposed changes at Canada Post at an emergency parliamentary committee meeting. He provided no evidence for his claim. This shameful response highlights just how heartless these service cuts are.

Myth: There is no privatization agenda at Canada Post.

Fact: Canada Post management has a privatization agenda. CEO Deepak Chopra sits on the board of the Conference Board of Canada, a policy think-tank that writes papers proposing policies for the federal and provincial governments to turn into legislation. The Conference Board of Canada wrote a paper that favoured wholesale privatization of the Canada Post. The paper even used faulty arguments and figures to justify privatization. In other words, sound and careful gathering of facts was dispensed in favour of ideologically-driven ideas.

Canadian companies, pro-corporate bureaucrats like Chopra, and their friends in the federal government have all watched Britain’s Royal Mail sold off well below its value. The privatization of Royal Mail ripped off the public. The privatized shares of the company were snatched up by major financial and corporate institutions, including many of the millionaires who populate the ruling British Conservative party.

Canada Post is a public service. It is owned by all Canadians. It should serve Canadians first as an affordable and effective communications and delivery system, not a cash cow for private interests at the expense of the public.

What needs to happen with Canada Post is an expansion of services like postal banking to improve services for rural Canada, saving home delivery for five million Canadian, and saving thousands of decent, hardworking jobs.

We have recently updated a couple of features on this website. We have developed two new pamphlets and a number of new posters that we hope can be useful tools for the fight against the cuts at Canada Post. These can all be found on our materials page.

The pamphlets are designed for a door-to-door campaign. One pamphlet lays out the basic situation at Canada Post and how you can get involved. The other pamphlet deals with the facts and myths about Canada Post. This pamphlet will help organizers confront widely held inaccuracies about Canada Post in a clear and direct manner.

We are still developing a basic campaign tool kit which involves a campaign guide and a door knocking script.

We have also added a community organizing contact form. We hope to connect you with others in your community who are interested in organizing.

We hope to also add new materials in the near future. We believe that a cross country organizing effort can reverse the cuts at Canada Post, people simply don’t want to pay more for less service.

Save Our Public Postal System

This website was created in 2011 to help support our postal workers in the face of government and management attacks on their working conditions and livelihoods.

The announcement that Canada Post Corporation will end home delivery in urban areas, increase the cost of postage and layoff between 8,000 to 10,000 employees over the next five years demands we, the public, take action.

These attacks by Canada Post and the federal government are a frontal assault on an important public institution. Thus, in the coming weeks we will be updating this site with more materials and campaign information to fight these cuts at Canada Post. In the mean time please download a poster and put it in your window or near your mailbox . Please also sign this petition and write your MP a letter.

Also consider reaching out to the nearest Canadian Union of Postal Workers local and your local labour council to see how you can help.

Together, we can win this fight!

BACKGROUND: Sometime after May 25th 45,000 Postal Workers across Canada may either be on strike or locked out from their workplace by their employer, Canada Post Corporation (CPC). Since January 31 of this year postal workers have been working without a contract. The Canadian Union of Postal Workers (CUPW) and CPC have been in bargaining since October of last year but have failed to come to an agreement on several issues.

Canada Post Corporation wants to:
• Pay new employees 30% less and give them reduced benefits; an inferior pension and weaker job security
• Increase the amount of temporary employees and reduce the number of full-time employees
• Dramatically increase the amount that retirees have to pay for their extended health care plan
• Replace the sick leave plan with a complicated and inferior short-term disability plan
• Force letter carriers to adopt a new, unsafe delivery procedure involving longer routes and the carrying of double bundles
Canada Post Corporation is a crown corporation. It has been profitable for the last 16 years. In its last reported year, 2009, CPC declared a net profit of $281 million. Instead of sharing some of those profits with postal workers, the CPC decided to purchase
2 billion dollars worth of machinery in an effort to “modernize” the postal system by reducing the work force, attacking the benefits and working conditions of the postal workers.

Postal workers want the CPC to make a modern post that works for the workers and the communities they serve. Instead the CPC and the Harper government hope to create precarious working conditions, ignore workers’ voices, cutback services and increase profits with the eventual aim of privatizing our postal service.
When the CPC attacks postal workers they are attacking people who live and work in our communities. This is an assault on all of us. The CPC, with the blessing of the Harper government, is looking to profit off the backs of working people. This assault is part of the broader Harper agenda of creating corporate profits at our expense.

• Educate yourself on the issues and stay informed about the struggle
• Talk to your friends, neighbours, family, coworkers, community groups, church groups etc. about the issues
• Put up signs of support in your window
• Go down to the picket lines (on Almond Street), with food or signs of support
• Write letters to the editor in your local newspaper
• Call your local radio station
• Organize fun and creative actions that raise awareness about the issues

Comments Off on POSTAL WORKERS NEED OUR SUPPORT!